Since my last post, Katie and I have been pushing forward on the wood floors. We finished up all of the second floor except for the walk in closet. As the stacks of flooring dwindled, my Chicken Little self kept envisioning the saloon floor with an unfinished closet sized patch where we ran out of flooring. But when the saloon floor was complete we still had enough wood to do both the first and second floor closets. That was a big relief. 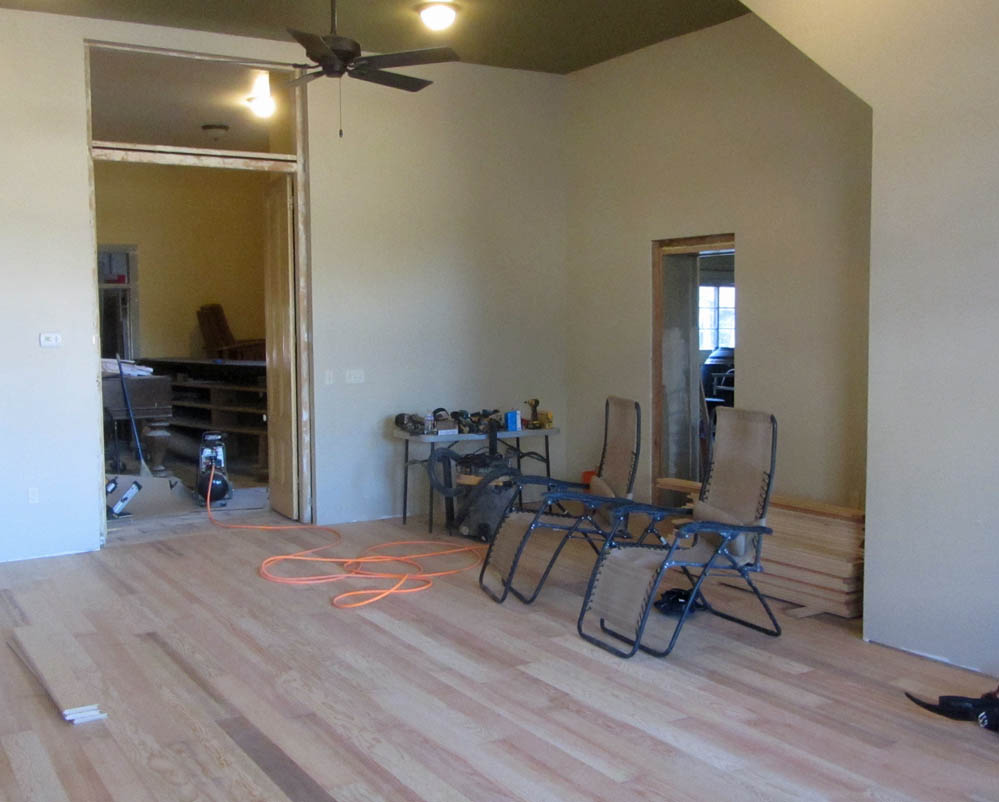 There were, of course, challenges on the way. The first of which was where to put all the stuff. 75% of the hotel has wood floors and they all had to be completely clear of stuff before the flooring could go down. This led to ridiculous looking conditions like a kitchen with a piano and bar in it. 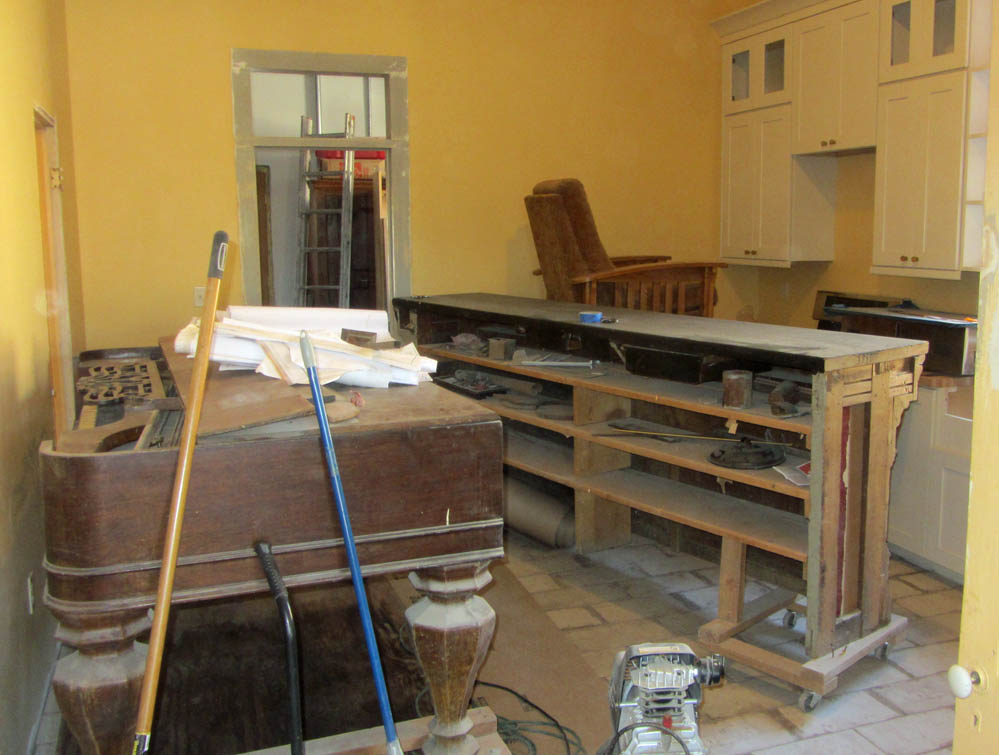 Also, several of the doors had to be removed for trimming because they would not open with the new and thicker flooring. This led to conversations like:

“What’s it doing there?”

“Leaning against the wall, I think.”

Meanwhile, the act of installing the flooring was troublesome on it’s own. The top of the stairs was probably the hardest part. 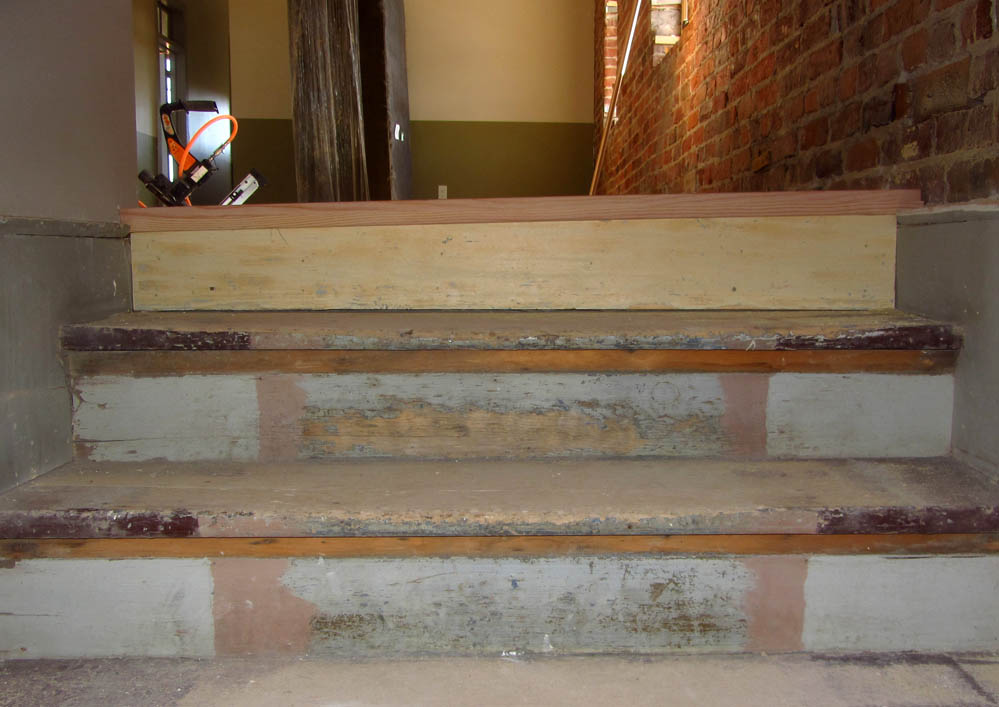 The stairs were level  but the floor of the upstairs living room had a dramatic slope to the East. The entire second floor does this and it’s been that way since it was built in 1870. As evidence to support this, all of the original East to West base boards were carefully tapered so that their top edges were level while their bottom edges were flush with the floor. As you can see from the photo, the top riser was far from even.

To make matters worse, there was a dip in the floor joists at the landing. 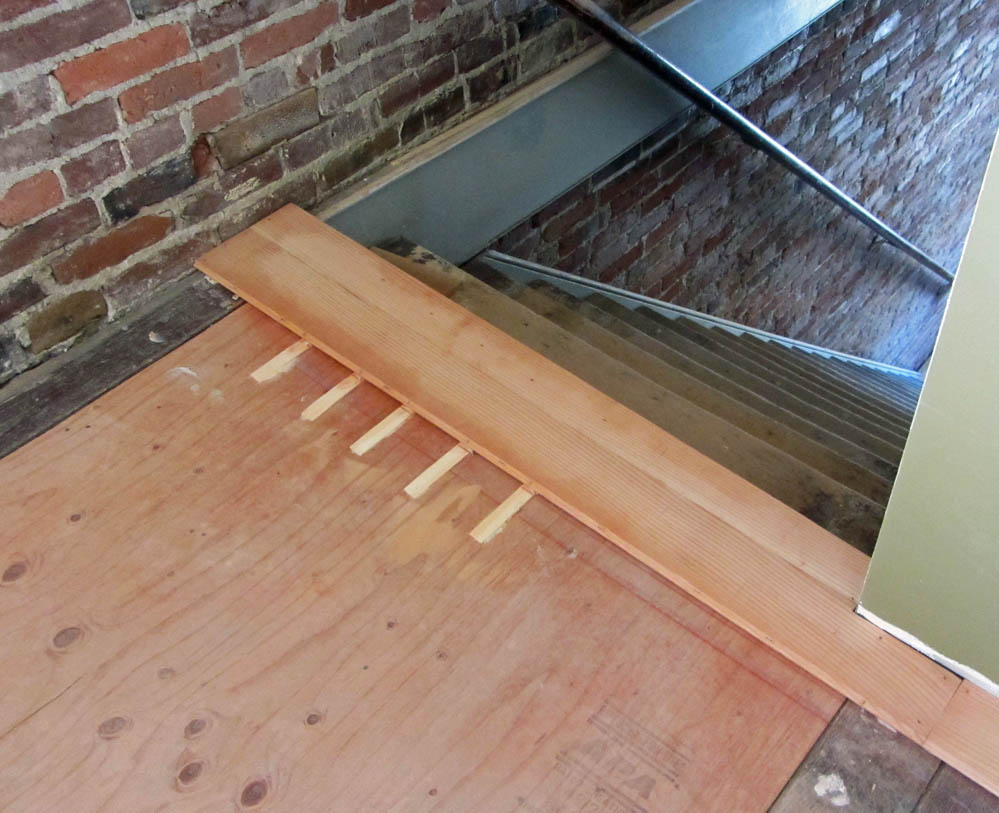 It was subtle so I didn’t notice it until after I had glued and nailed down a plywood patch replacing all the original floor boards that were too decayed to support the new landing. This was a problem since the new flooring was flat and would not bend sufficiently to accommodate the unevenness.  The best solution was to devise some tapered shims that allowed the new flooring to transition from the straight riser at the top of the stairs to the curved floor beyond.

After that hard bit was sorted out, it was just a matter of nailing the new flooring down with what I like to call “The Beast”.

This clever gizmo connects to an air compressor and drives a serrated steel cleat at a 45 degree angle through the edge of the floor board thus rendering the cleat invisible when the next board is set in place. The way it works is that one sets the nail gun with the yellow arrow on the edge of the plank and hits the big black button with a heavy rubber mallet. The mallet blow causes the plank to snug up tightly to a previously nailed plank while the cleat is driven by compressed air thus securing the plank to the sub floor. The handle on top is for moving the nail gun. The handle; however, is so short that one would have to be 4’6″ to feel comfortable using it and after nailing 1500 square feet of flooring, I’m now shuffling about with a hunched back and wondering where the nearest bell tower is.

The next step will be applying stain and finish which I’ll address in the next post. But for now, it’s off to finish the closets and practice a French accent for Halloween.