We’ve been at this project for quite a long time now and wearing things out is inevitable. My shoes for instance. 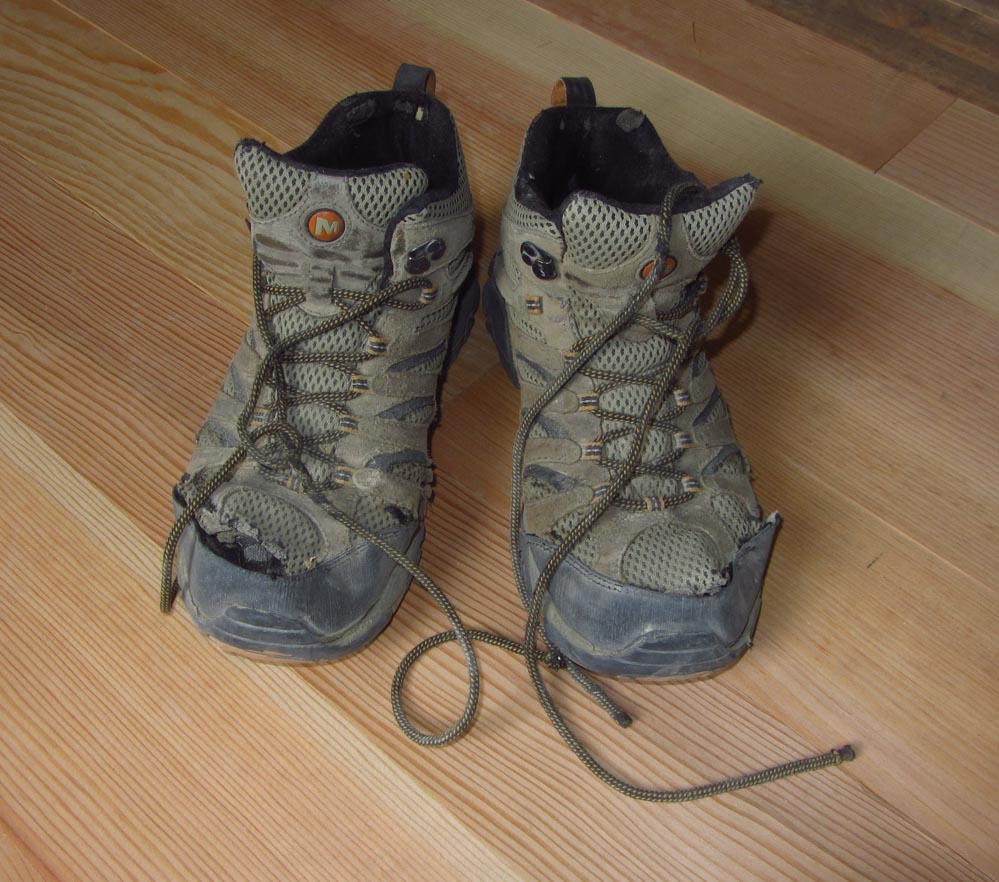 I bought these for a fabulous trip to visit friends in the UK where these shoes have strolled through many sheep pastures, ancient castles and picturesque graveyards. Now, they have fallen victim to too much kneeling on wooden floors.

The wooden floors; however, are in great shape. The Doug Fir planking is going down fairly easily despite none of the rooms being truly square. The last plank in each room always requires a tapering cut which I do freehand on the table saw. This seems tricky at first but it’s no worse than using a Skillsaw and my cuts are quite straight.

My real concern is how well the old plank floors under the new ones will hold up. They took a considerable amount of water damage last fall when the roof was off and they developed quite a bit of cupping that had to be flattened out.  A ton of galvanized ring shank nails took out most of the cupping and a bit of heavy sanding knocked down the really bad stuff. It seems to have worked so far in that none of the new planking squeaks but it might in the future. Of course, since our look is “ghost town revival” a few squeaks won’t be a bad thing.

Besides the boots, the only other casualty of floor laying was my rubber mallet. 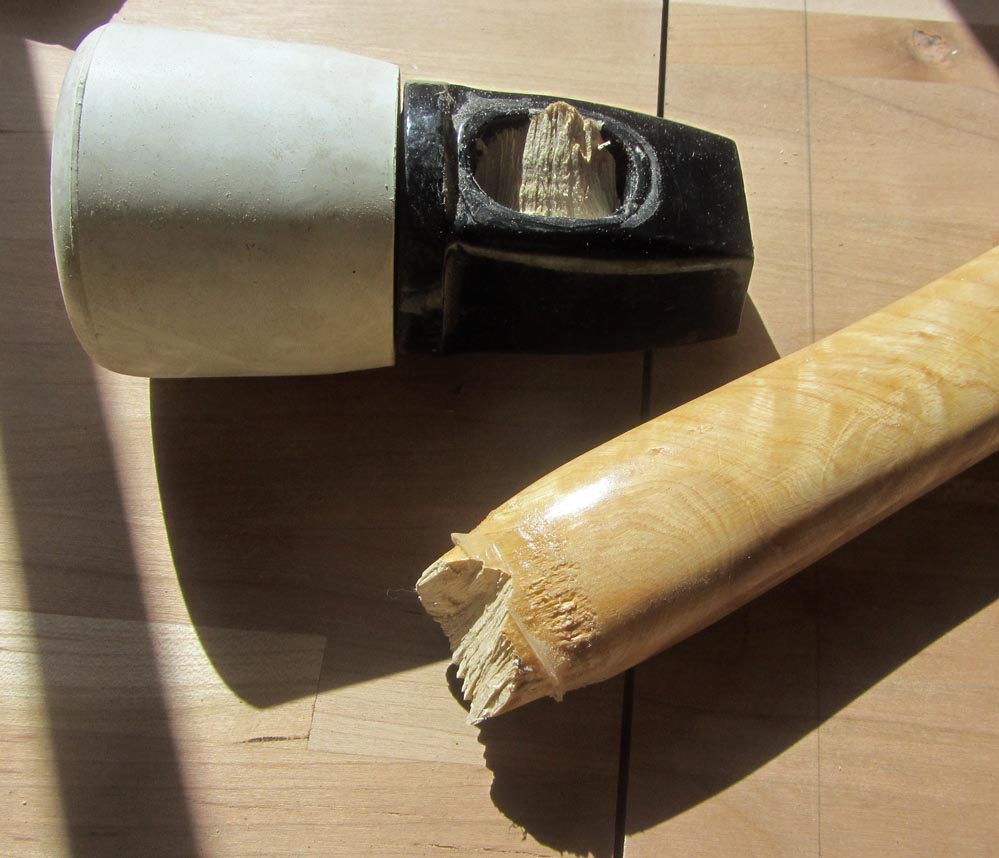 When I first got it, I noted how cool the wood grain was but that; in fact, turned out to be its own downfall. Instead of the grain being straight and strong through the mallet head, it curved at a 45 degree angle making it very weak and after 800 square feet of flooring, it neatly snapped while whacking a particularly unrepentant plank.

On a more successful note, our color pallet has been working out nicely. Katie chose a green hue for the master bedroom and it serendipitously turned out to be a color that was used downstairs in the original saloon. 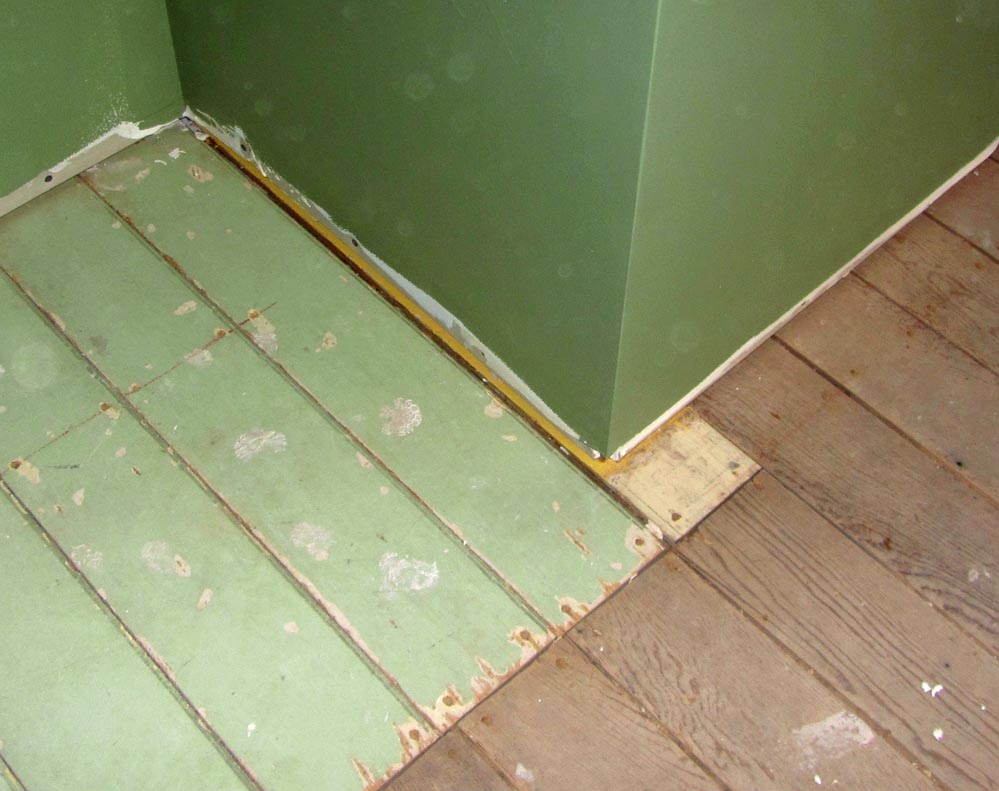 You can see the similarity in the photo above. The green floorboards were salvaged from a saloon wall to repair the bedroom floor. The wall color is just a darker version of the original. 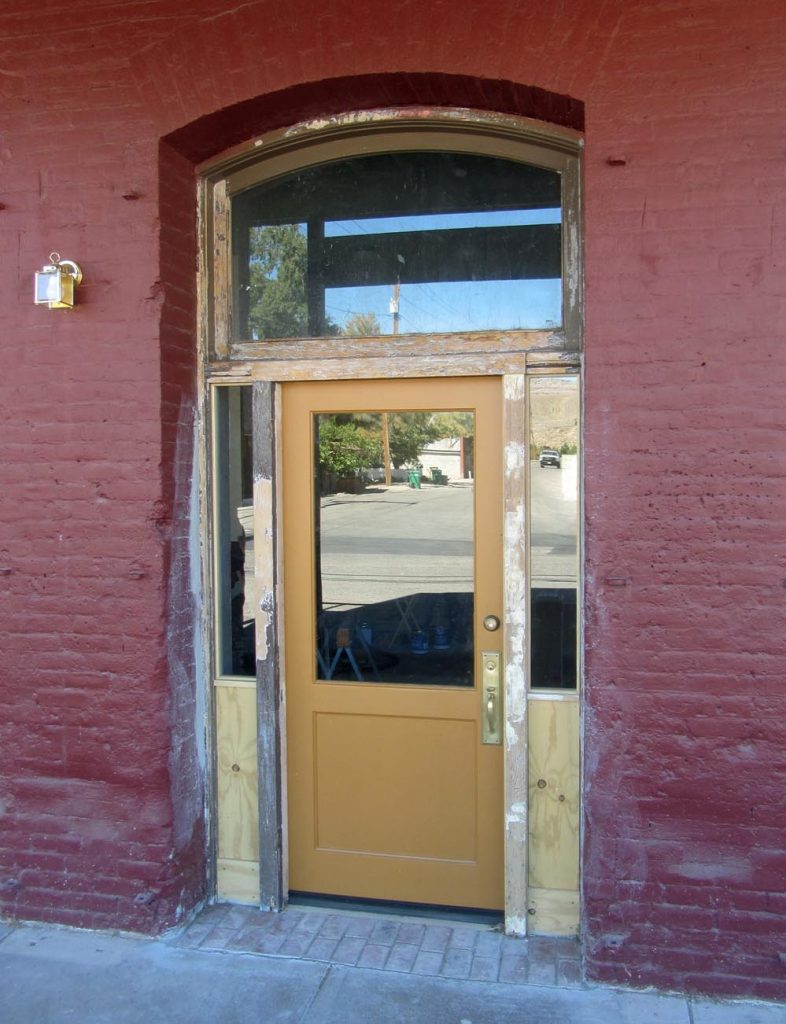 The ocher color is the same that we are using on the windows and the trim color to come, is a deep brown which you may recognize from earlier posts. The front facade is hardly complete but the new brick threshold is in and all of the glass is now 1/4″ tempered to make it safe for the public. As for the porch lamp, it’s just a placeholder until we can find an antique that more suits the look.

When we started this project, we were warned that there would be the occasional hiccough. One of these was the coughing toilet. For weeks after installation, air kept leaking into the water lines which caused much chugging and hacking each time the tank refilled. Eventually, the plumber figured out that this was air escaping from the empty hot water heater. The chugging ceased once the water heater was full so that story ended happily enough.

Another hiccough was one of my own creation which I really should just leave unstated but it does make a good story. When cutting the butcher block counter tops for the kitchen, I was a little concerned because cherry is a rather dense hard wood that sometimes offers challenges. My first attempt lived up to this concern quite satisfactorily. 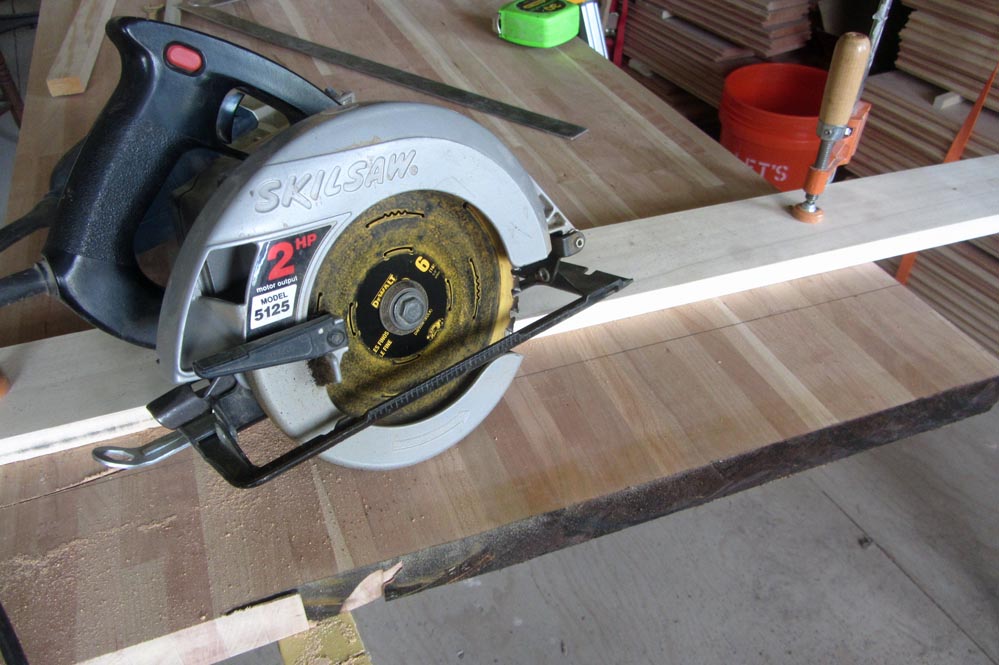 With great clouds of blue smoke, the Skilsaw blade burned through most of the first cut until it just stalled before completing the task. Of course, the new smoke detectors didn’t notice anything in the saloon as Katie ran to open all the windows in an attempt to clear the haze. It seems that their job is to go off randomly to report when the air is clear and real smoke is beyond their interest. In any case, neither the saw nor the smoke detectors were working correctly.

In a vain hope at fixing the situation, I ran off to the hardware store to buy another blade. The new blade, however, gave the same results as the first one which led to some panicked head scratching.  Then, I noticed the direction of the saw teeth. The blade was on backwards! That’s what I get for buying second hand tools with no manual. To make matters worse, a backwards blade cuts through soft woods just fine so I never noticed before. Feeling really stupid, I flipped the blade and completed cutting the counters with no further issue.

Well, enough of my silliness and on to something of real importance. The last item of the seismic retrofit has been completed! The beam that adds rigidity to the staircase wall has been successfully installed and signed off by the building inspector. 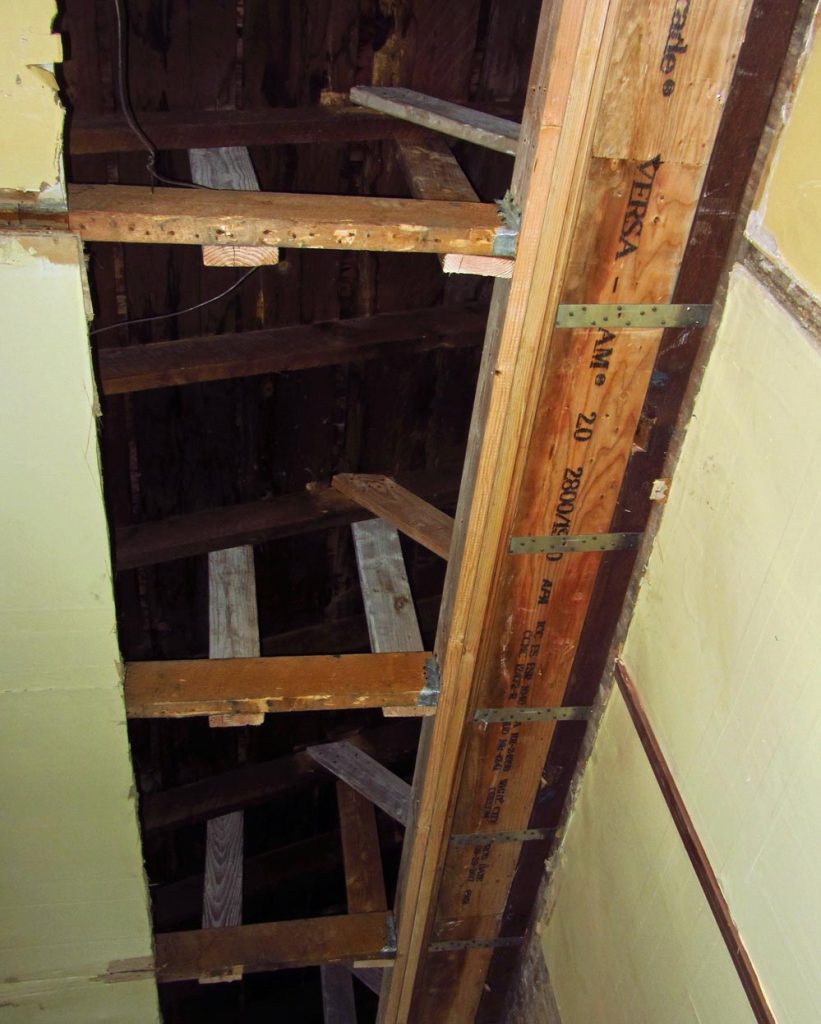 As originally designed, the beam was supposed to be a 28′ long iron box beam that weighed around two tons. It was an okay design for strength but getting it into place proved to be impossible without a crane and the crane was impossible because of power lines in front of the hotel blocking access. As a result, our contractor got his own engineer to design a wood option which the county approved. It is actually several wooden beams that were hoisted into place separately and bolted together to become one thus providing required rigidity without needing a crane.

The final addition for today’s post is the upgrade on the front door. Previously, it was held shut with a padlock that could only be secured from the outside. This caused a problem of curious people entering the saloon while we were working upstairs. We expected this to happen when the front door was open but folks were letting themselves in even when the door was closed. So….. 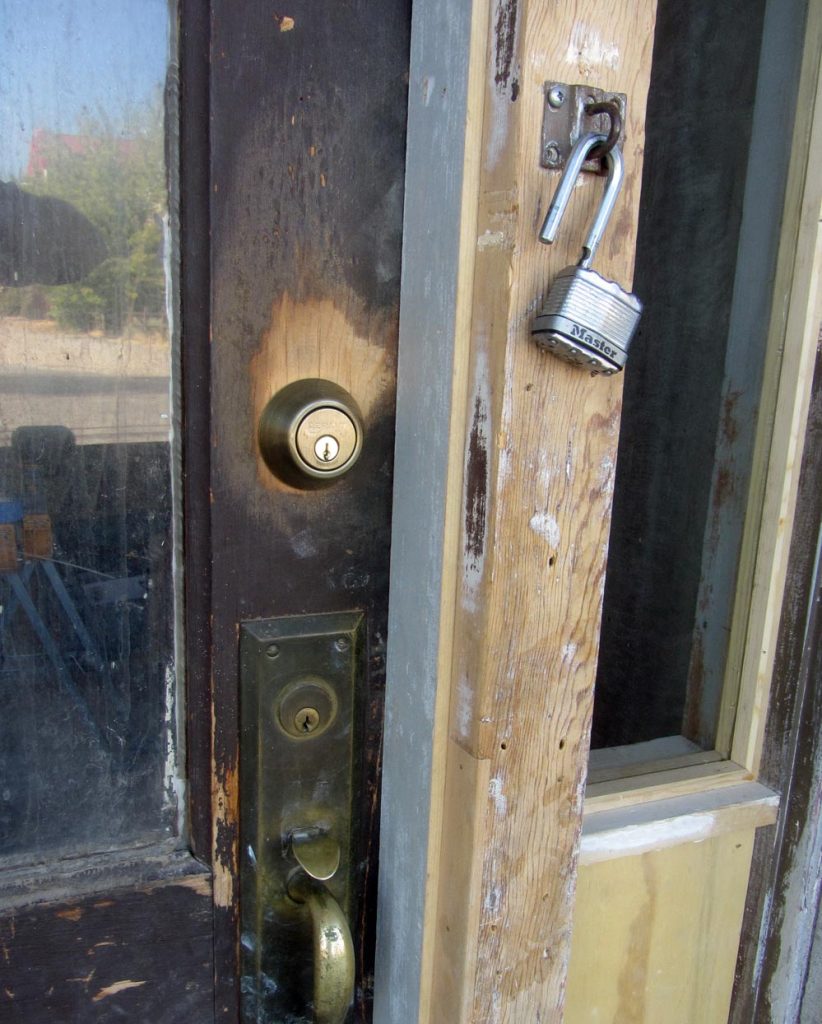 there is now a deadbolt on the front door. Originally, I’d intended to put a new lock cylinder in the original mortise lock but it was so much easier just to leave it alone and add a modern deadbolt above it.

I think the next addition will be a doorbell since we do still enjoy guests. We just don’t want them wandering around downstairs unattended.