The hotel has seen several upgrades in the past two weeks with the most dramatic being the new ceiling fans. 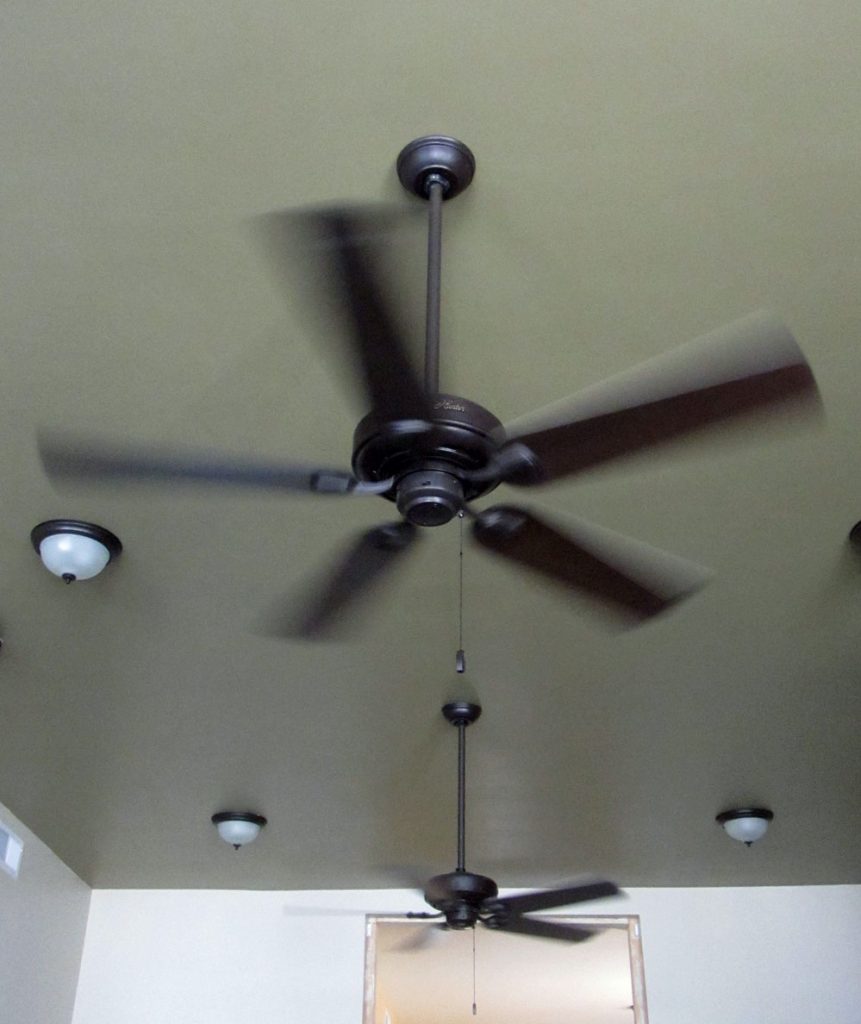 I bought six of these Hunter fans that I found on sale for 60% off. They look fairly accurate for the period design so they will be installed in all of the bedrooms and the living room upstairs as well as the saloon which is shown above. Pay no attention to those light fixtures. They are temporary and will be replaced by a set of antique fixtures when I get time to rewire them.

The saloon is definitely more comfortable with the fans going which inspired one of the locals to drop in for a chance to cool off. 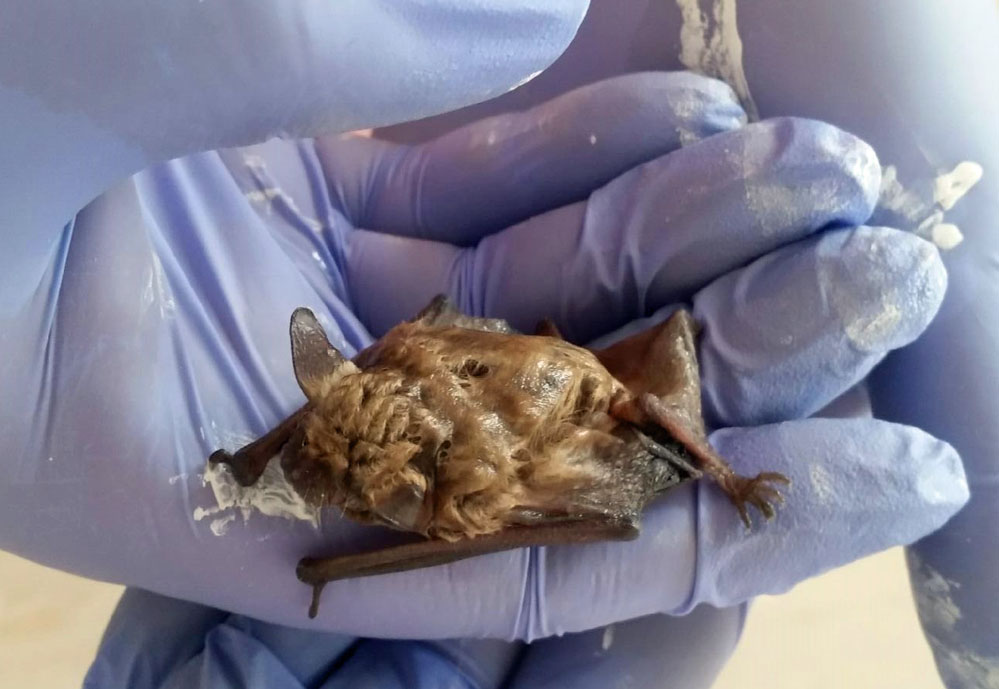 I found this little guy swimming around in a bucket of water that I had for mixing mortar. He was unable to fly out in his waterlogged state but was able to use his cute little turned up nose as a snorkel while awaiting rescue. When I fished him out, he was barely moving but he perked right up when Katie toweled him off. We set him outside in a box and he was on his way as soon as his fur was dry.

Well, our bat friend is gone and another thing that is gone is the porti potty.  You see, it’s Katie’s and my second wedding anniversary and although, it’s supposed to be a cotton gift, I opted for porcelain by installing a much needed toilet. 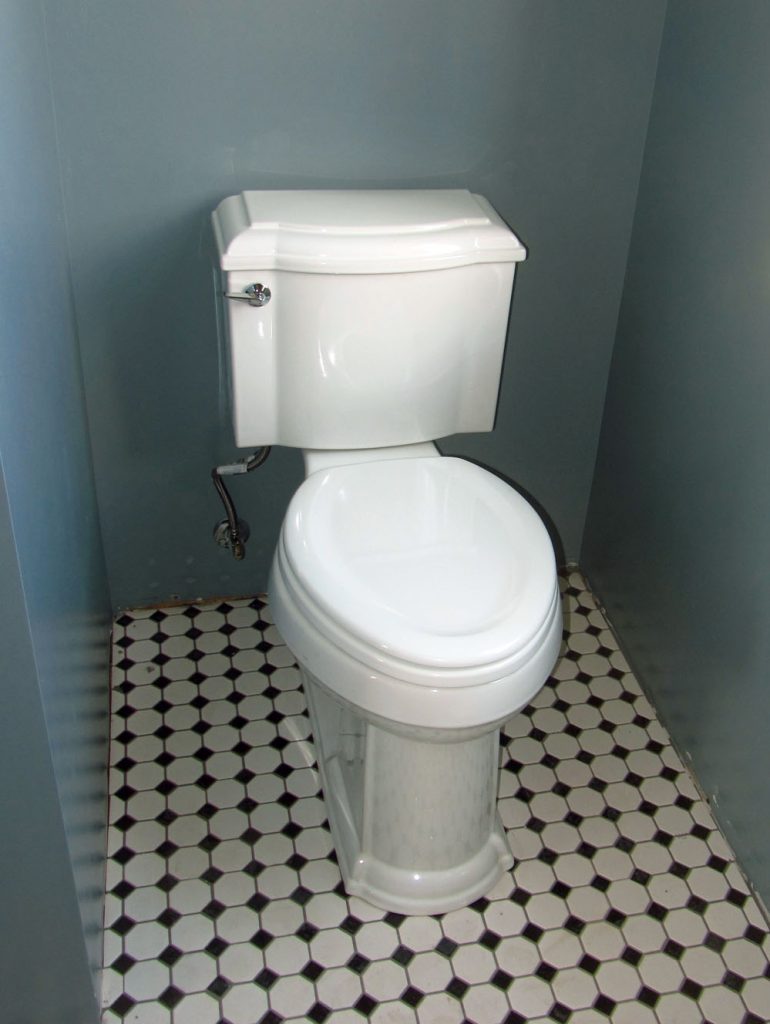 I found that it wasn’t as hard as I’d feared and when I turned on the valve allowing water to rush into all the new plumbing, there were no unintended fountains, just a calmly filling toilet tank. It even flushes correctly! The big hurdle is getting used to indoor plumbing again.

Of course, a properly flushing toilet demands a proper sink so I wrestled the vanity out of the garage and got to work. Katie and I purchased an old English buffet last year and when we got it home, we discovered that it was made up of parts from a couple of different pieces of furniture and had several instances of wood beetle damage. This actually worked better for me since I didn’t need to feel guilty when I removed the top and ripped the guts out. As for the beetles, they seem to be long gone with no new sawdust sifting out of the cabinet. Fingers are crossed. 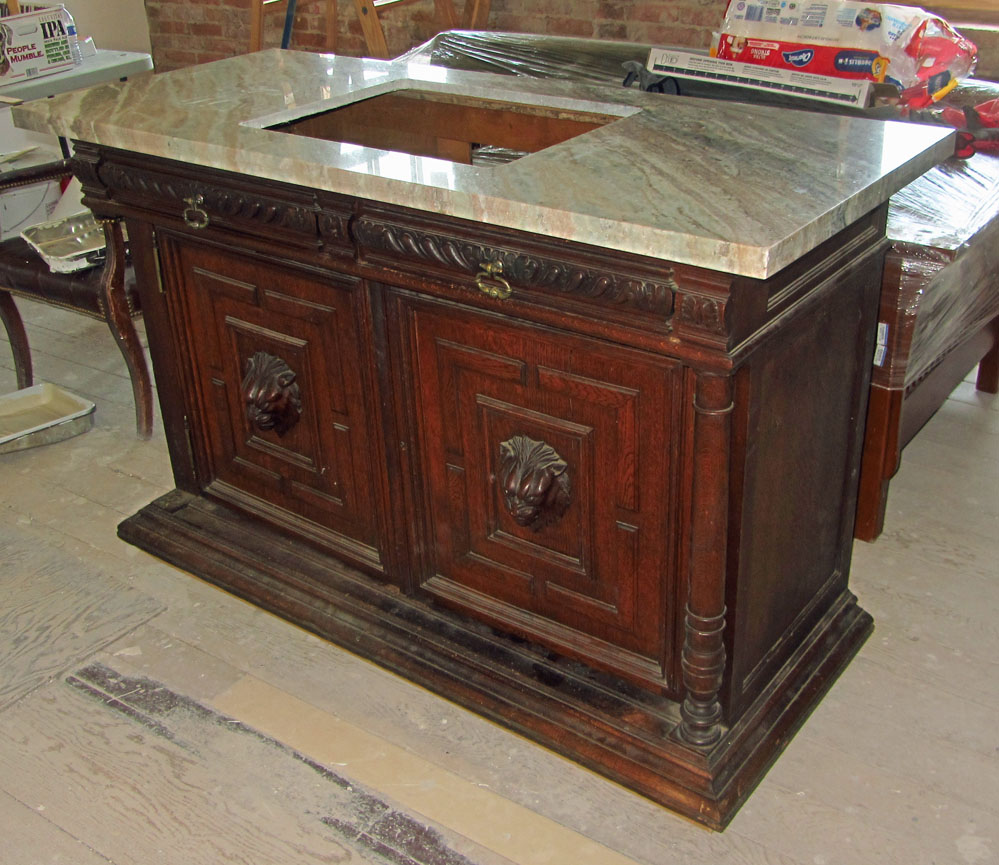 The granite counter top is new and the sink bowl will be a white rectangular porcelain model that looks similar to the toilet. We made a point of buying the tub, toilet and sink from the same manufacturer to make sure that the white glazes would all be the same.

The cabinet itself posed a few problems like remounting the drawer fronts permanently after removing the drawer boxes. As you’ll also note, the column on the left is missing. It was pretty banged up on the bottom so Papa Geppetto will have to do a little repair work on it but it should look fabulous once done. Despite its flaws, the whole thing looks rather extraordinary and with a coat of wax, it will look even better.

By the next post, the vanity will have the sink bowl installed and all the plumbing hitched up.

It’s hard to imagine that we’d ever get this far but we are now in the process of laying the floors. The push for this began with an effort to get rid of the portable outhouse. The $120 a month rental fees have been a thorn in our side for nearly a year as project delays have held up the completion of the indoor plumbing but that’s another story. So, what does this have to do with floors? Well, we couldn’t install a toilet without having the tile work done first. So, I finally unboxed the unused Harbor Freight tile saw that’s been collecting dust for months. This model rated really well with users and with a 20% off coupon, it was half the price of the similar Home Depot model. 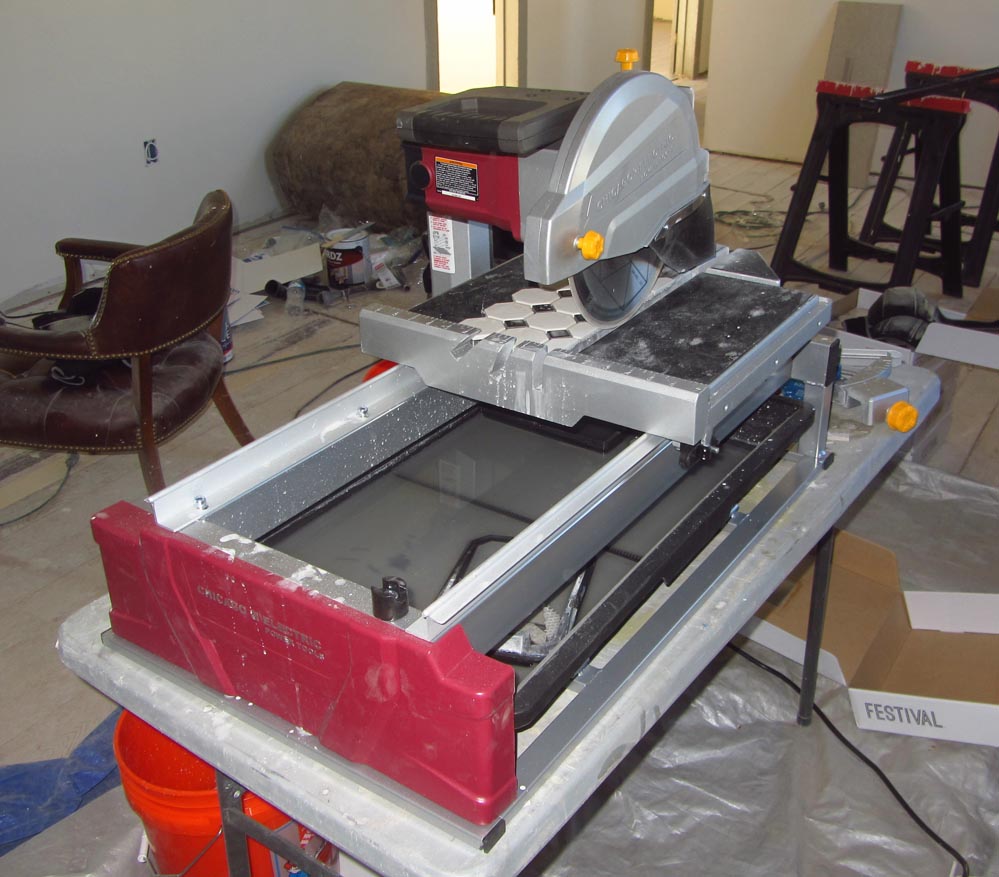 Now, I’ve tiled a couple of shower stalls in the past with 12″ square tiles but only a small part of that experience translated to setting a bathroom floor with antique style hex tiles. 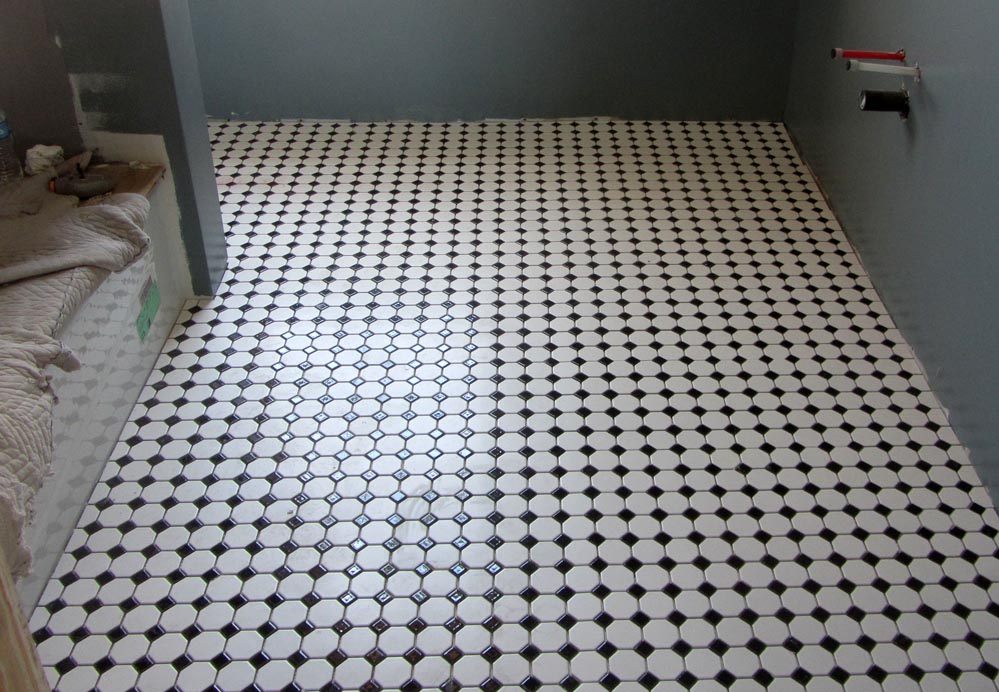 Trying to keep these guys straight was quite a challenge particularly in the hot weather with the mortar drying too quickly. Once set in place, the tiles were pretty much stuck with little chance to adjust placement which led to moments of panic and frenzied cursing. In the end; however, the results were pretty impressive.

Meanwhile, we took a brief break to receive the wood flooring we had ordered. 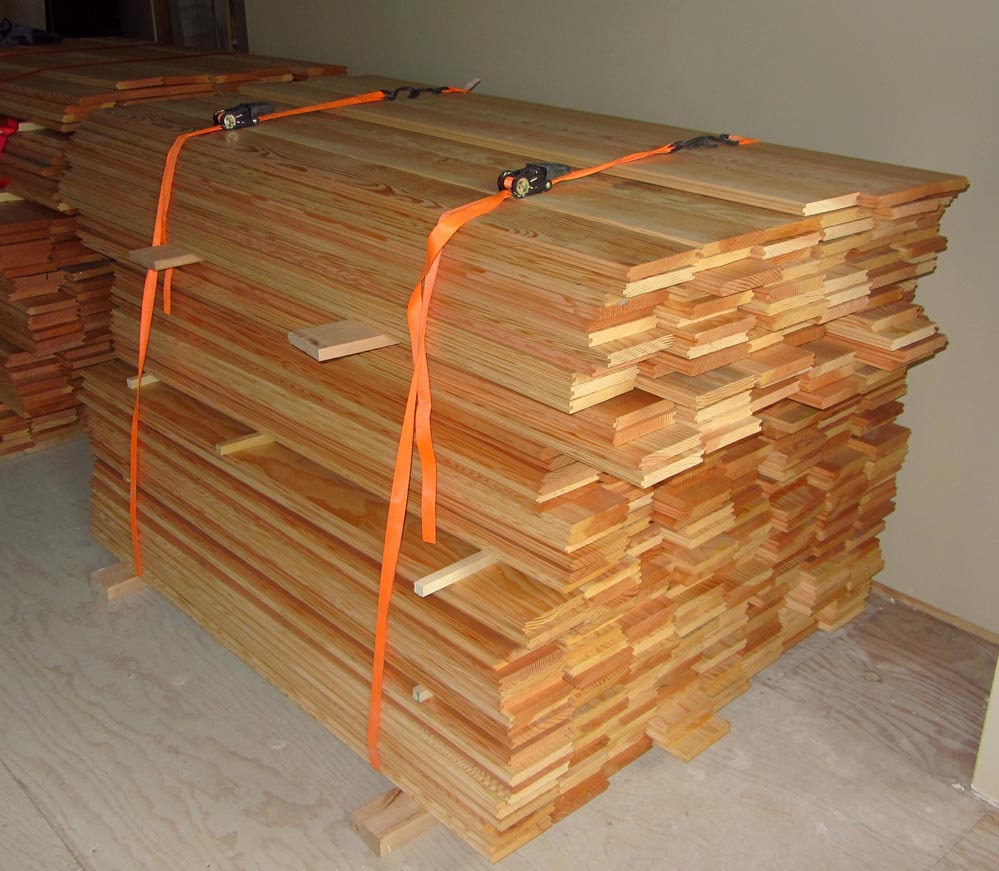 We were originally looking at yellow pine but we stumble across a mill that had a large quantity of mixed grain fir from a canceled order. This was fortuitous because the fir looks more like the original hotel floors than the pine would have. Of course, nothing is every easy around here. There is a high curb at the front of the hotel which prevented the delivery driver from wheeling the wood in on a pallet jack. Instead, he dropped the pallets in the street and Katie, I and a friend, lugged it all in by hand. The wood is now stacked in the saloon where it will stay for another week or two. It has to acclimate to the local humidity and the straps you see are to keep it from warping before we can nail it down.

On the matter of warping, there was another concern we had to deal with. Some of the original plank floors upstairs had taken so much water damage over the years that they had become badly cupped. The worst of it was in Katie’s future office so I set about nailing down the existing planks with 2″ galvanized nails to stop any squeaking or bouncing. I normally would have used screws for this purpose but the pine floor joists were so soft that the screws weren’t getting a strong bite. On the other hand, galvanized nails are known for their ability to grip which they did well in this case. 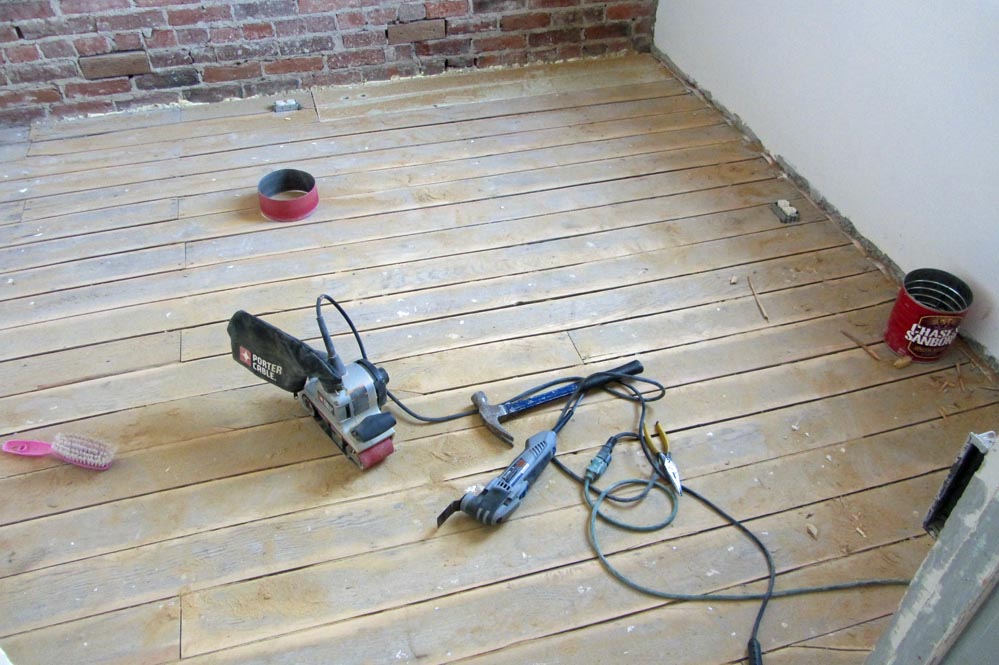 After nailing everything down, I then used the belt sander to knock down the high edges of the cupped boards. The new floor boards will be run perpendicular to the old ones so with luck, it will be pretty flat and solid.

We have our work cut out for us in the next couple of weeks but in the meantime, I’d like to ask if there are any locals who have the ability to make metal caps for our three abandoned chimneys? I made heavy wooden ones to cover the chimneys temporarily but mother nature keeps blowing them off on a regular basis. We need a permanent solution that I can attach with masonry anchors.

Previously, our neighbor Ken filled in the old privy pit with his tractor and leveled quite a bit of the back yard. This was in preparation for the addition of a water line from the meter at the street to the back of the hotel. 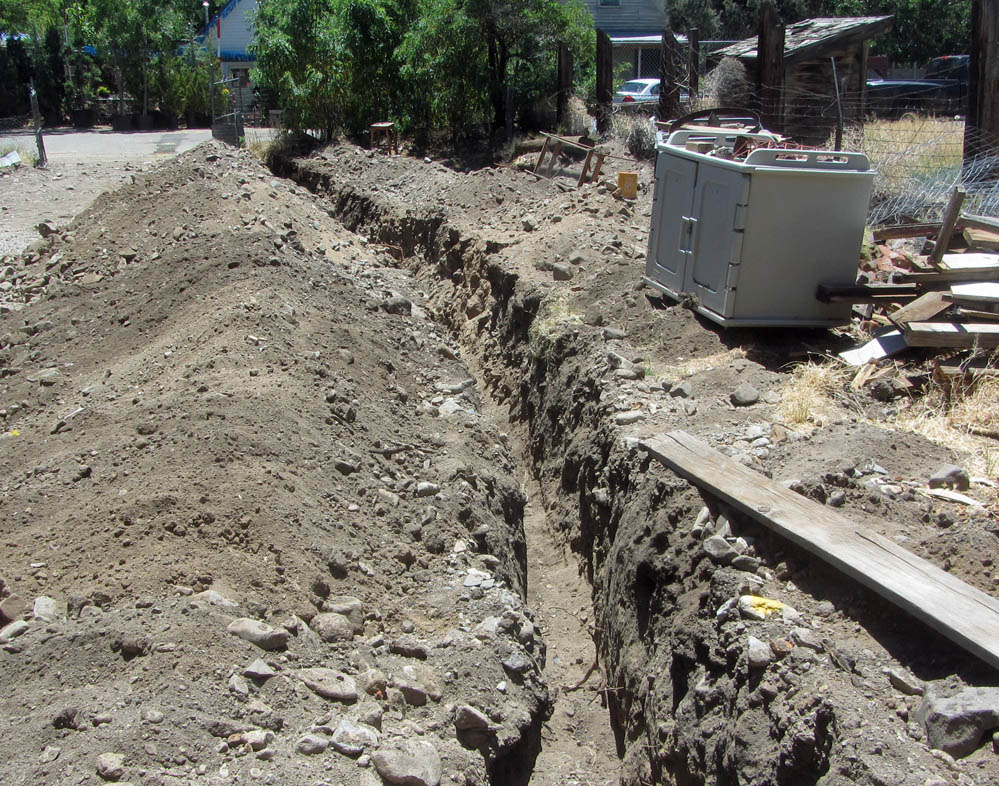 The next week, Ken returned and dug the trench for us. This was not the easiest thing to do because the soil type is “Alluvial Fan” which is simply all of the silt and rocks that have washed out of Gold Canyon for thousands of years.  Being that it’s mostly rocks, Alluvial Fan is quite stable stuff and makes for a great foundation in earthquake country but the rock needs to be broken loose to be removed from the trench and this causes the sides of the trench to fall back in leaving me with the task of picking them out of the trench with a shovel in the hot sun. When I graduated from college, they promised me that I would never have to do this sort of work. I wonder where I went wrong.

All was not sweat soaked drudgery though. Katie and I had a bit of fun picking around for more interesting stuff. 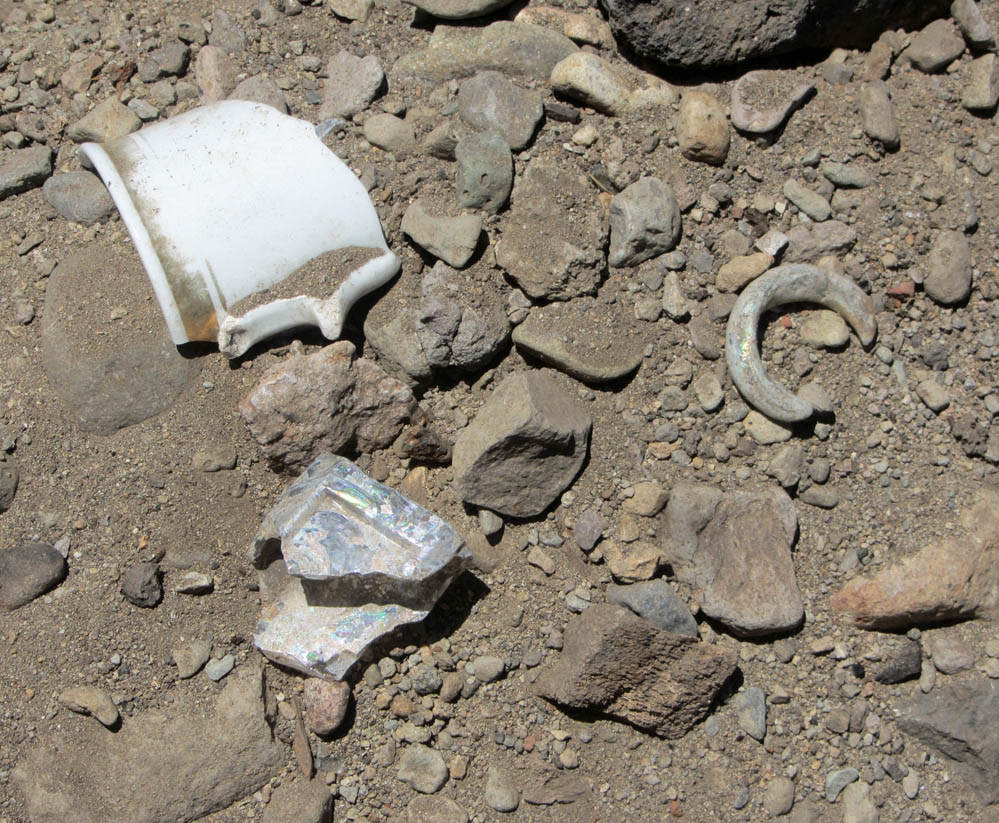 Toward the back of the yard, there was evidence of several burn pits which yielded lots of broken pieces; however, we only found one complete bottle  in the entire trench. It’s becoming evident that bottle diggers have already dug up the good stuff.

After the trench was dug, I busied myself with the back door threshold. 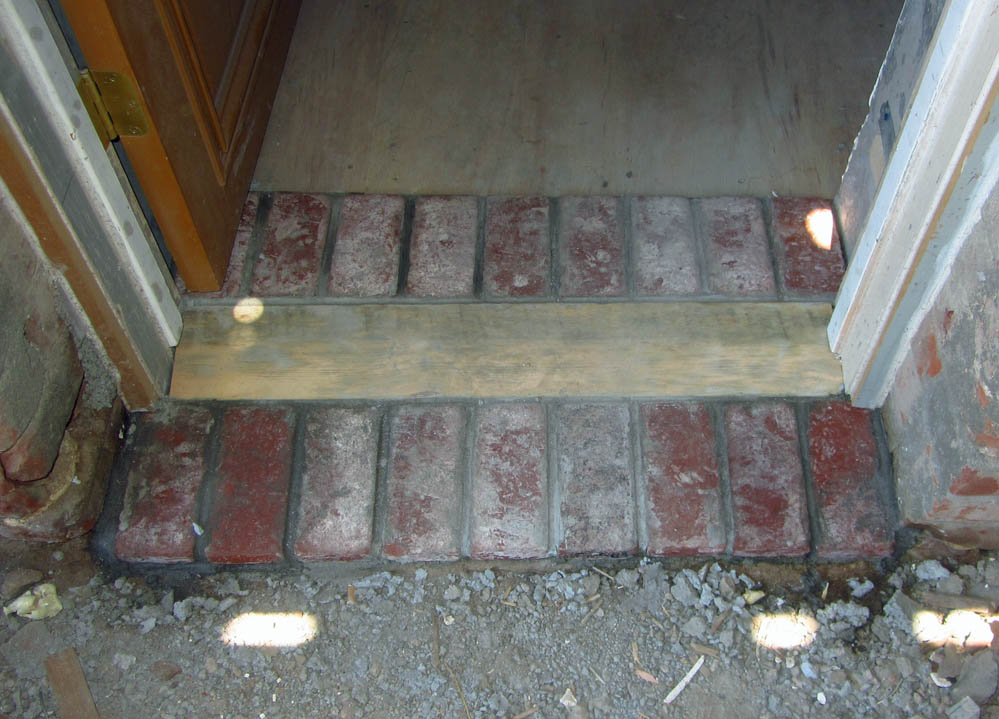 The wood threshold was shaped to fit from an old window jamb I salvaged from upstairs. It’s old growth pine and should last longer than any new wood that I can buy. The bricks are inch thick pavers and, sad to say, they are new. The reason for this is that new bricks are much harder than the old ones and should last longer than I do. The inch thick size also made installing them a lot easier. If I’d used the old bricks, I would have had to split them on the tile saw which I wasn’t too excited about.

With that job well done, Katie and I rewarded ourselves with a short vacation with our rocket friends. 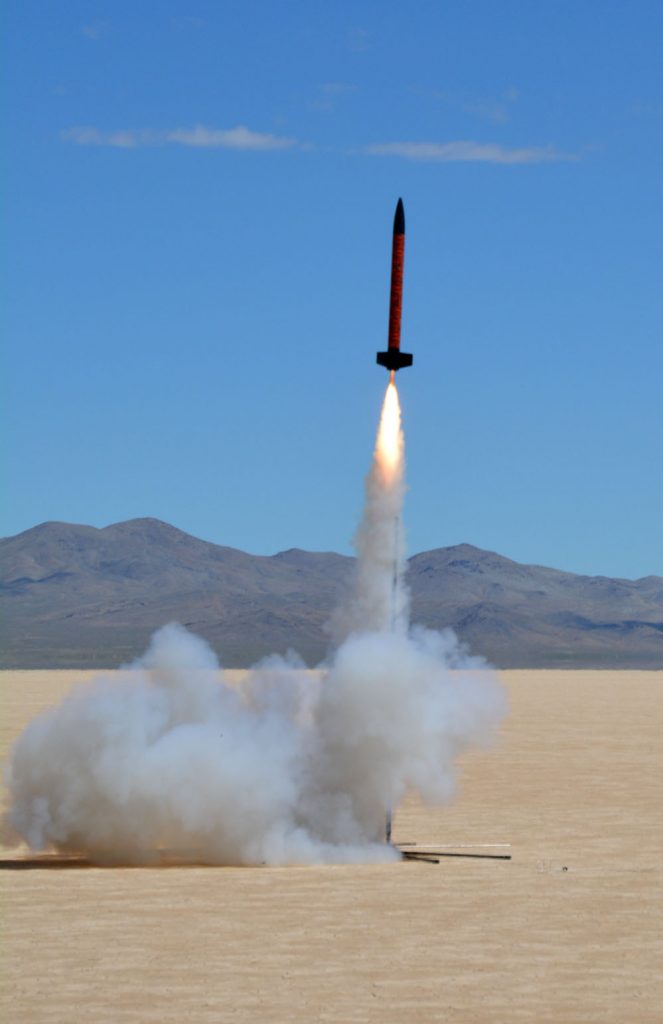 Katie flew her tiger striped rocket to six thousand feet several times and my rockets crashed for the most part which is why the hotel has a dedicated rocket building room in the back. This little setback is the perfect excuse to have fun building more rockets.

While we were out launching things, the plumbers showed up to lay the water pipe without the benefit of my baleful eye watching over them. 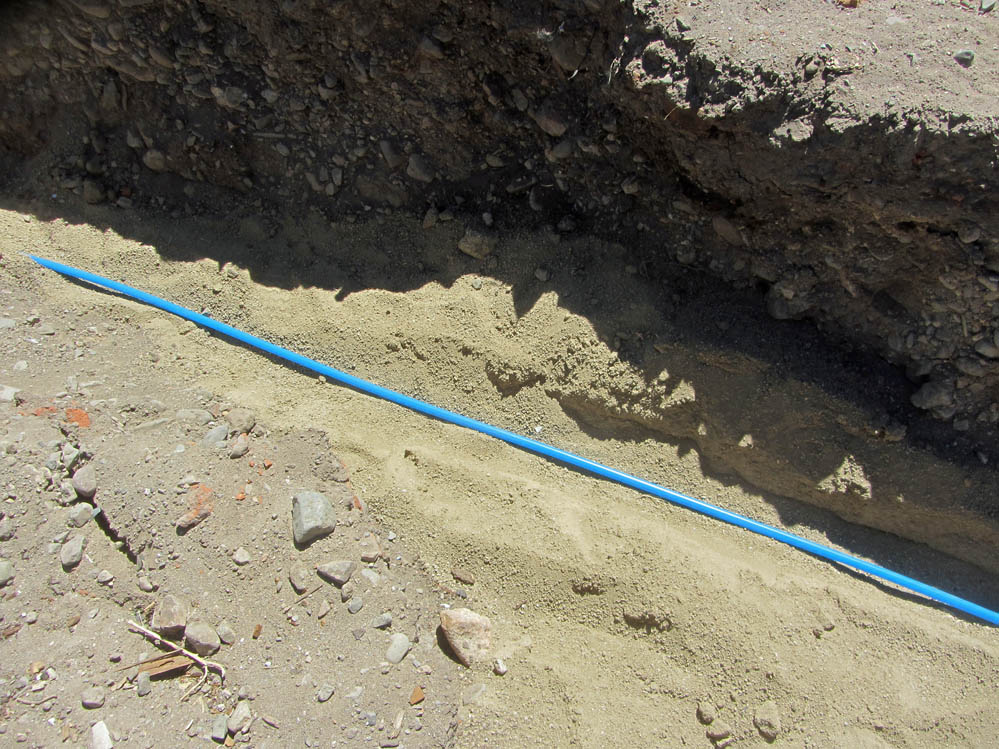 Despite this, they did a pretty good job but I didn’t get the yard hydrant that was in the plans. They’ll be back in a week so I’ll be able to get that sorted out as well.

In ending, I’d like to thank Ken and his tractor for all the work that he’s done for us including both the sewer and water trenches. I also suggest visiting his nursery behind the hotel on Silver Street. Ken provides both plants and tractor services at lower prices than the dealers up in Reno and we are looking forward to planting our yard with his stock. 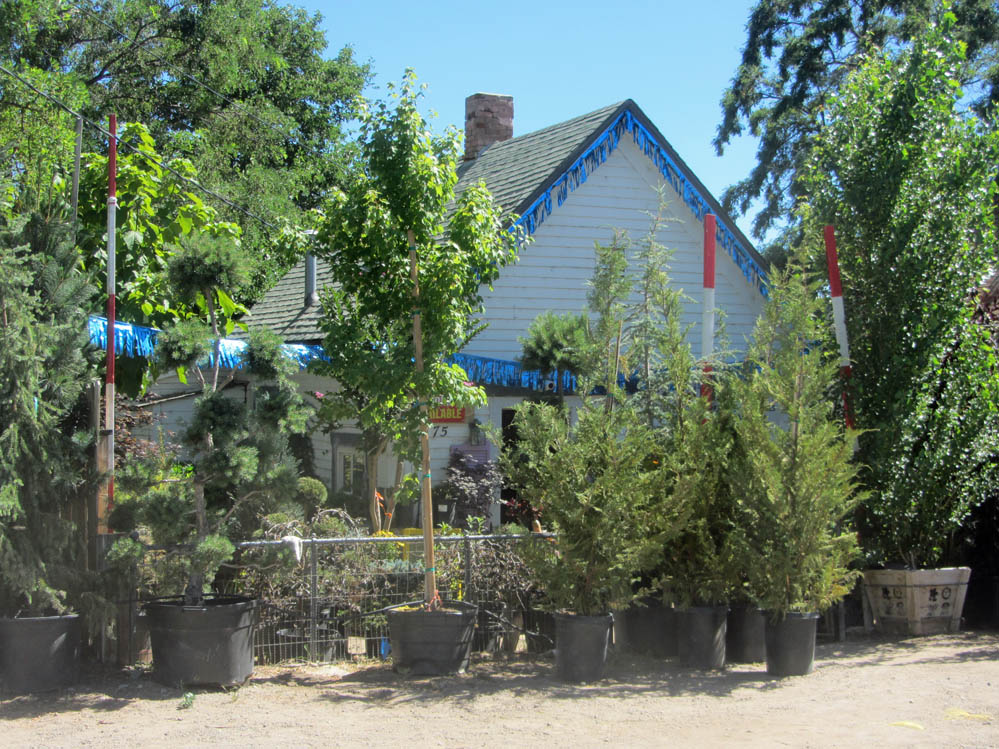