We were honored to be contacted by Tai Long who is the great great great granddaughter of the original Union owners Charlie and Carolyne Gruber. She shared with us quite a bit of information handed down from Iva Gruber, who was Carolyne’s granddaughter. 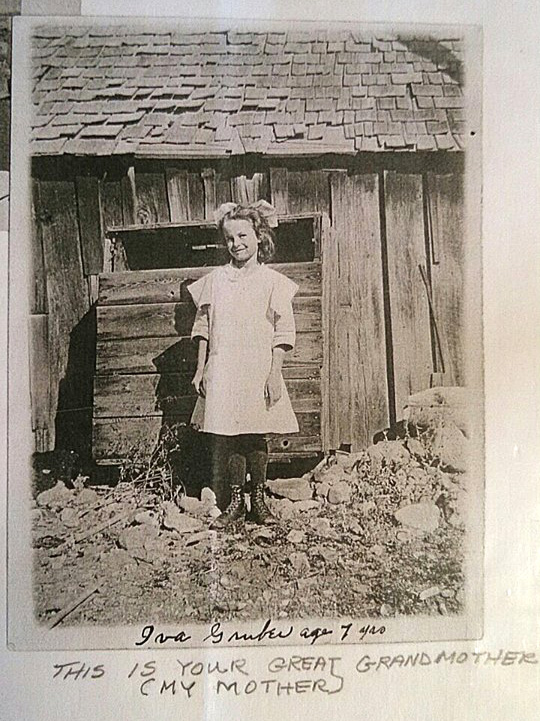 There is a lot of information but I’ve taken the liberty of paraphrasing to simply address the physical arrangement of the hotel for this post. More will come later. I promise.

The Union Hotel consisted of two sections. The brick portion remains today and is the part that we are renovating. There also was a wooden building attached to the rear of the brick building that no longer exists other than a few foundation stones buried in the yard. The Sanborn map from 1890 confirms the location of this structure. It’s the yellow building marked CL. 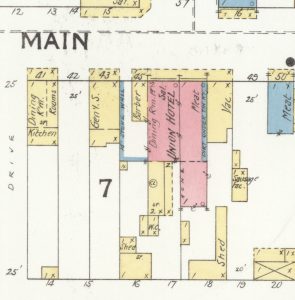 The hotel had 14 small bedrooms upstairs, 10 in the brick part and 4 in the wooden part. The brick building also had a suite across the front which consisted of a bedroom and elaborately furnished parlor with a wood coal stove. Each bedroom had a bed, dresser, marble top wash stand with pitcher and bowl set, thunder jar (pee pot) and soap dish. There were also hooks on the door to hang cloths on. The rooms on one side of the hall were double beds and the other side of the hall were single beds. It’s interesting to note that there was only one closet on the entire second floor. It was attached to the suite and doubled as a separate entrance to the suite’s bedroom.

Necessary functions were carried out manually. As there was no running water, it had to be carried upstairs to fill the pitchers and the slops were emptied down the 2 story outhouse which served upstairs and downstairs. The second floor of the outhouse was accessed by a bridge from the back of the wooden part of the hotel which, of course, no longer remains.

The outhouse itself was a bit of a marvel. Upstairs, there were 2 rooms for patrons, each had 2 holes and a lock on the door for privacy and believe it or not, catalogues were placed on the seats for use as toilet paper. Downstairs, the Gruber family had 2 holes on one side. On the other side, beyond a wall and a privacy fence, there was a public room with 2 holes. Apparently, the outhouse was torn down in 1950 for safety reasons. This conflicts with the other legends we’ve heard about the structure being strapped to a flatbed truck and shipped to Hollywood as a gag gift with a large red ribbon on it.

The main floor of the hotel had a huge barroom. It consisted of a long bar and a glass cabinet hung on the wall. It had rock specimens and 2 baby crocodiles preserved in a bottle of alcohol. A pot belly stove stood 10 ft from the corner. Along the wall, were 3 marble top wash basins with running cold water. There was always a tea kettle on the pot belly for shaving purposes for roomers. A large square piano was also in this room with 4 legs and made out of rosewood. It played rinky tink sounds and it’s still in the hotel today.

In the back half of the brick building, there was a huge dining room. This was served from a huge kitchen with a large range with double ovens and warming ovens. There were also two large pantries. It is my guess that this kitchen was on the first floor of the wooden building in back.

Oh, and for those who are interested in how the renovation is coming along, we’ve made quite a bit of progress on the little details required before the drywall can go on. In particular, the stove flue has been boxed out on its way to the roof and the data cable to bring internet to Katie’s and my office has been run. The coolest bit though, is that Katie finished cleaning the exposed brick in her office and hit it with a coat of dust sealer. You can see how beautiful the brick becomes with verses the dusty original on the left. 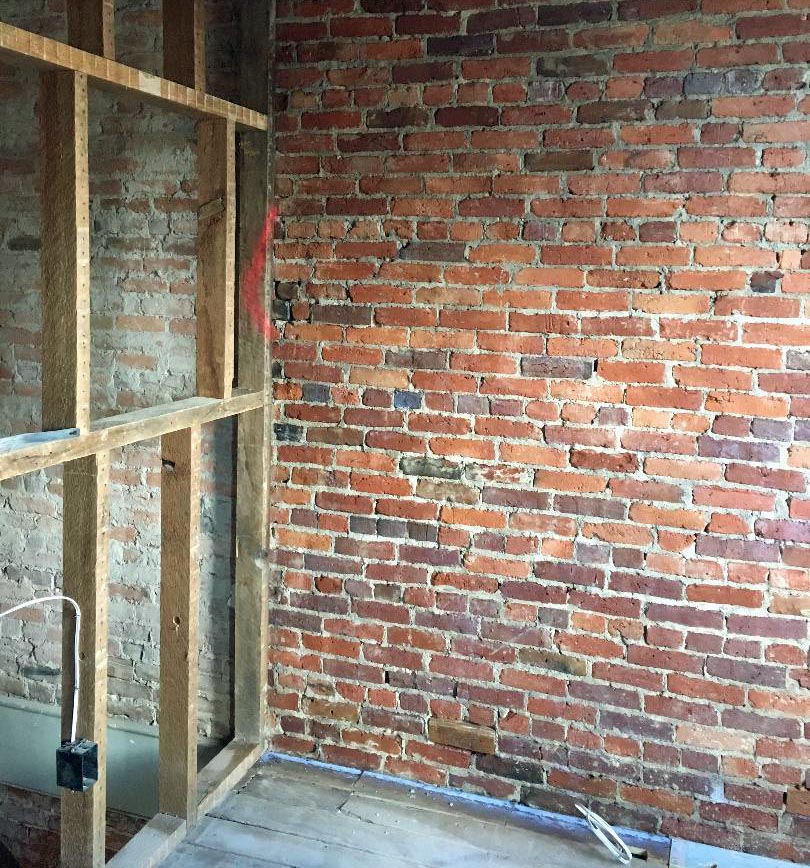 We are now getting the plumbing completed and the electrical started so the hotel has become a busy place. Over the weekend; however, the contractors were not there so Katie and I were able to finish hanging the doors in the Kitchen. The hardest part of it was hauling them downstairs since they were quite heavy. 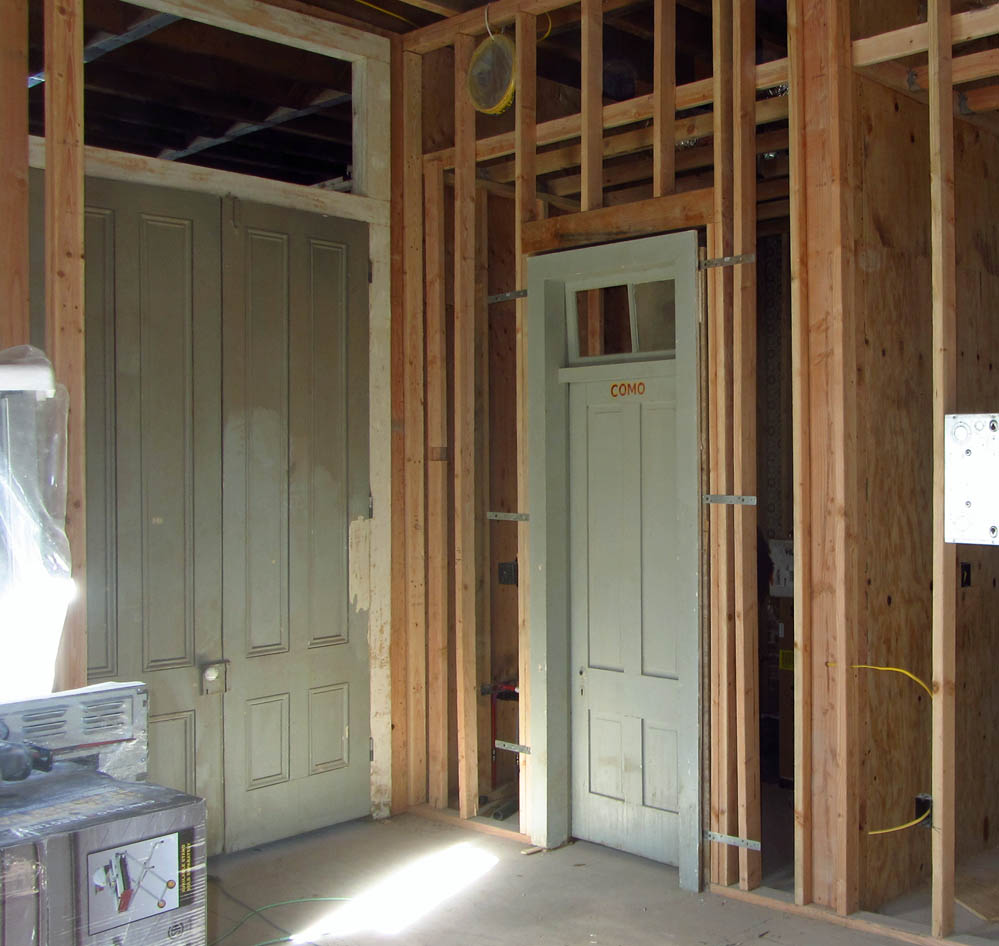 The double 9′ doors, on the left, were the originals connecting the kitchen to the saloon and they survived several months of storage while the seismic retrofits were being completed. They used to open into the saloon but we flipped them around so they now open into the kitchen were they tuck against the wall without impeding traffic. The other door is to the new bathroom and it was one of the heavy ones recycled from the second floor.

Upon reinstallation of the double doors, we discovered that the top of the doors were 1 1/2″ wider than they were at the bottom. This may have been an accident but then again, it may have been a brilliant intentional feature. As a case in point, the Greeks made columns wider at the top in order to counteract the perspective problems of looking up at a tall detail. The end result was a column that looked less tapered when viewed up from the bottom. Maybe this is what Mr. Gruber had in mind when he had these doors made.

As for the transom in the double door, it was missing when we bought the place but it really is a blessing in disguise. Both Katie and I are stained glass artists so we have a wonderful opportunity to create something new. 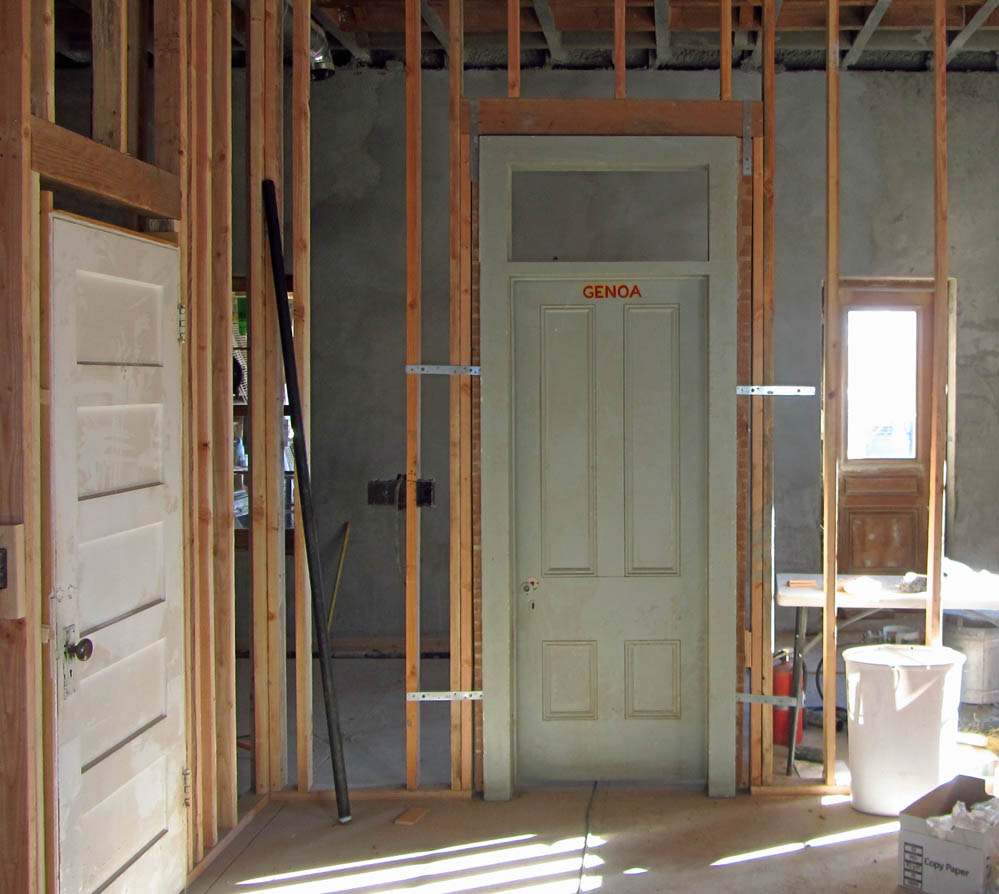 The back door of the kitchen was also recycled from the second floor. The white door to the left is to the new pantry and it used to be to the old first floor bathroom before we rebuilt the walls. It is from the 20s which explains why it’s a different style from the 1870s doors with the transoms. It was also a lot lighter and easier to move than the 1870s behemoths.

Along with the doors, Katie and I roughed out the banister at the new landing. Once it is covered in drywall, We’ll put a cap on the railing and newel post to dress it up a bit. The window shelf will also get a wood deck so that the cats will have a nice place to relax while observing the passing traffic.

Granted, this look is a bit plain but it is our intention to create something more elegant once we are living there. We need to find the right architectural elements to reuse or build them from scratch both of which will take time. It’s all part of the wonderful journey which we hope will never end.