As we continue the careful demolition of the interior, it’s become apparent that many of the wall surfaces require replacement to satisfy the new building codes and seismic retrofits. Few of the existing walls were covered in modern drywall. Most of it was a mixture of plaster on lath, ¼” thick plywood, particleboard and, in some cases, ¾” thick pine walls with no framing studs at all. In addition, some of the framing methods were rather creative. As a case in point, some door frames were only held in place by the trim with no other method of securing them to the stud wall thus leading to catching both door and jamb as they fell out of the wall when the last bit of casing was removed. Granted this was a lot easier than sawing through nails and shims but it warranted a certain amount of vigilance to avoid being squished like a bug.

If you’ve been following the blog, you know that all the lath and plaster has already been removed upstairs. This material was rather easy after 150 years of moisture. The plaster was just falling off the walls and the lath was only held to the studs with tacks so it came down with little effort. The challenge was that it made a huge mess on the floor which obstructed further work. But, before the plaster could be shoveled up, the lath had to be carefully picked out of the mess. Imagine trying to scoop sugar with a teaspoon when the sugar is under a pile of a thousand chopsticks. Once we figured this out, my wife and I changed our approach and peeled the plaster off first, shoveled it up and then pulled the lath off the wall as a second step. It was still a mess but much more manageable.

As for removing drywall, it’s relatively easy since it breaks up into manageable chunks. If you’re lucky, or possibly unlucky, some of the drywall will come off the studs in huge chunks with little effort. At one point, I was trying to figure out how to remove a huge sheet of drywall on the stairwell ceiling. It was water damaged so it had to come down but being above the stairwell posed the problem of how to set up the ladder to get to such a high place. At that point, my wife gave it a tentative prod with a long crowbar and the whole thing came down with a dramatic crash missing me by inches. Problem solved.

The hardest wall covering to remove is the 1920s vintage plywood. It was used on all the walls in the dining room and while it is quite easy to clean up after, it’s a real pill to remove from the studs. The stuff is springy and it does not break up so it has to be removed in entire sheets with dozens of nails. After quite a bit of prying around each edge, the sheet requires a really good heave to break it loose. The reward for this is a free flying chunk of plywood while the ladder is illustrating the theory that “every action has an equal and opposite reaction.” I’ll be so glad when all the plywood is down.

I’ve spent the last week getting ready for demo work on the first floor. We’ve gotten the old bar up on furniture dollies so we can move it out of harms way and the piano has its own wheels so it’s good to go. There are; however, more items in the way that I can offer to my honored readers. We’ve got several old fashioned bed springs, two vintage record players, a sewing machine and Edna McDiarmid’s old TV set. 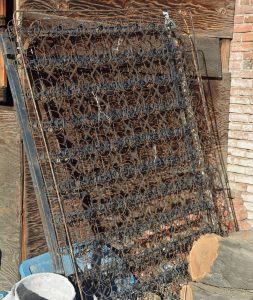 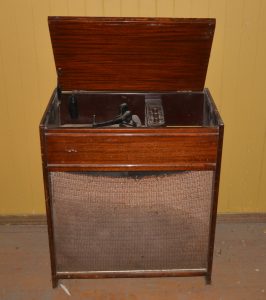 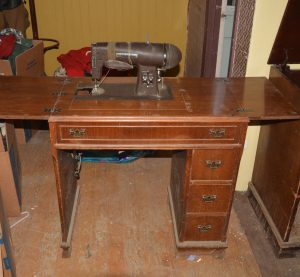 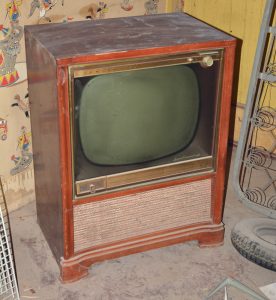 I hate to haul these to the dump so they are free for the taking or, if you feel inclined, we will accept a donation to the building fund. Just respond to this post and we can arrange a pickup.