It was a sad day today as we said farewell to the Black Locust trees behind the hotel and in the Pony Express yard. All of them were either dead from neglect or mostly dead and the larger ones were threatening the walls. As you probably remember, the yard was pretty wild when we bought the place. 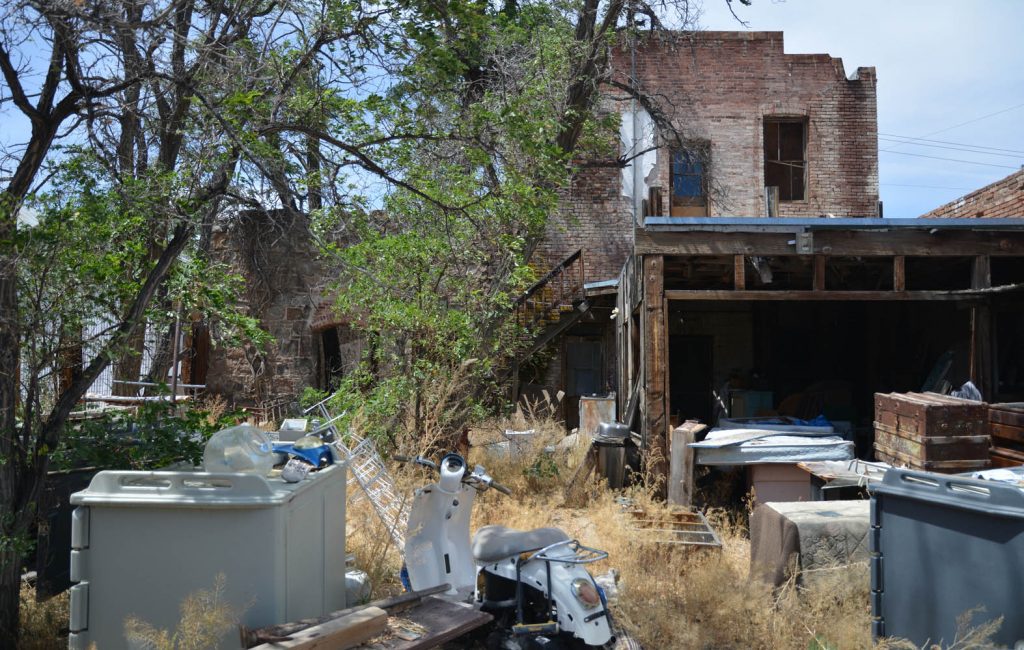 The trees were putting out a few leaves but most of the greenery was on the suckers and the trunks were quite barren. 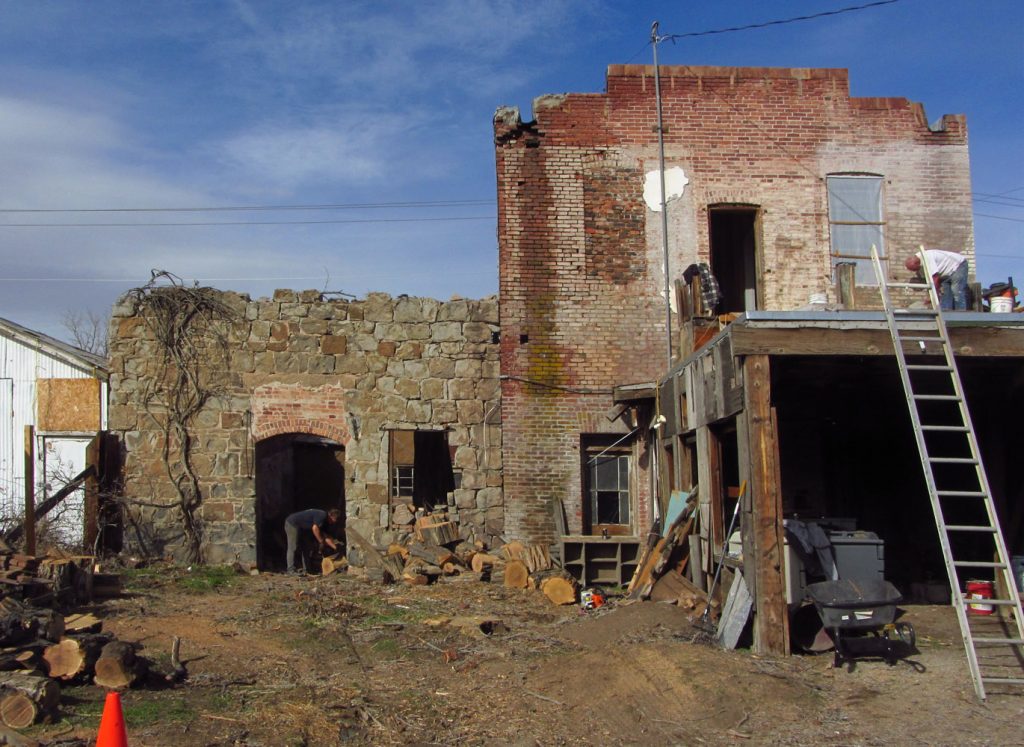 Now, the back of the hotel is clear. 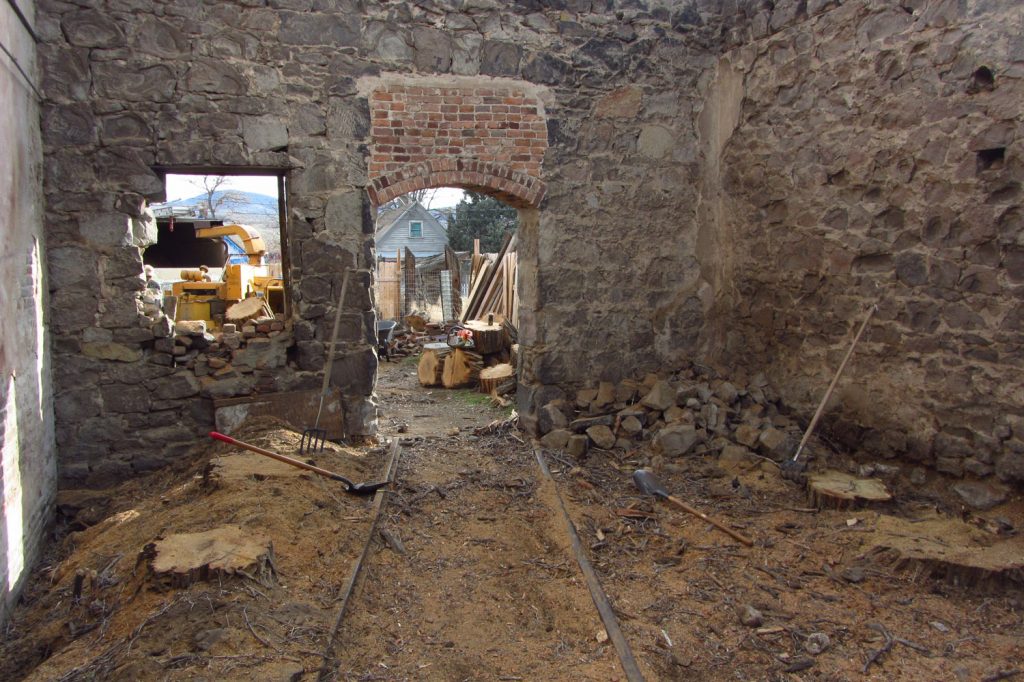 And the four trees in the Pony Express yard are gone as well.

It’s interesting to note that Black Locust trees are not native to Nevada. They were imported because their wood has excellent rot resistance and serves well as mine timbers. As an ornamental, though, they’re not so good with erratic brittle limbs and a sticky sap that rains in mists over everything  nearby.

All history aside, we now have room to work and space to plant new trees of our choice with Nevada native trees being our first choice.

I think this is the best one so far.

In an attempt to recreate the historic look of the back of the hotel, we must pay special attention to the back balcony. It provided a rear exit from the second floor to the ground by way of a long staircase. This was probably more for access to the outhouse than it was for escaping fires but who really knows? Now, it would be easy enough to just copy the original but the original design does not live up the current building codes and would never get approved by the county.

In the original, the stairs exited the left of the balcony and went straight down to land adjacent to the door to the Pony Express yard. This was a long and steep staircase which I’m okay with but it would make the building department unhappy. The new stairs have to be much less steep and there must be a landing somewhere in the middle for people to rest on their upward journey. As you can see in the above model, the stairs will have to bend in the middle and head out into the yard. Not only will this take up more space, but also, I now have a column on the wall in the same space as my breaker panel thus requiring it to move at great expense.

In this next version, I’ve flipped the balcony and put the exit stairs on the right. Not only is this more aesthetically pleasing, but also, it avoids blocking the breaker panel. It’s now up to the engineer to decide what works.

We finally have the seismic retrofit plans but now we are faced with the county. The hurdle that the county has set in place is that, despite the special use permit for residential, this project is still considered to be commercial and we must get a general contractor to handle our subcontractors. This is frustrating because it adds another level of expense to do the coordination that we’re already doing ourselves.

While we are now looking for a GC, we’ve kept ourselves busy with the upstairs prep work. 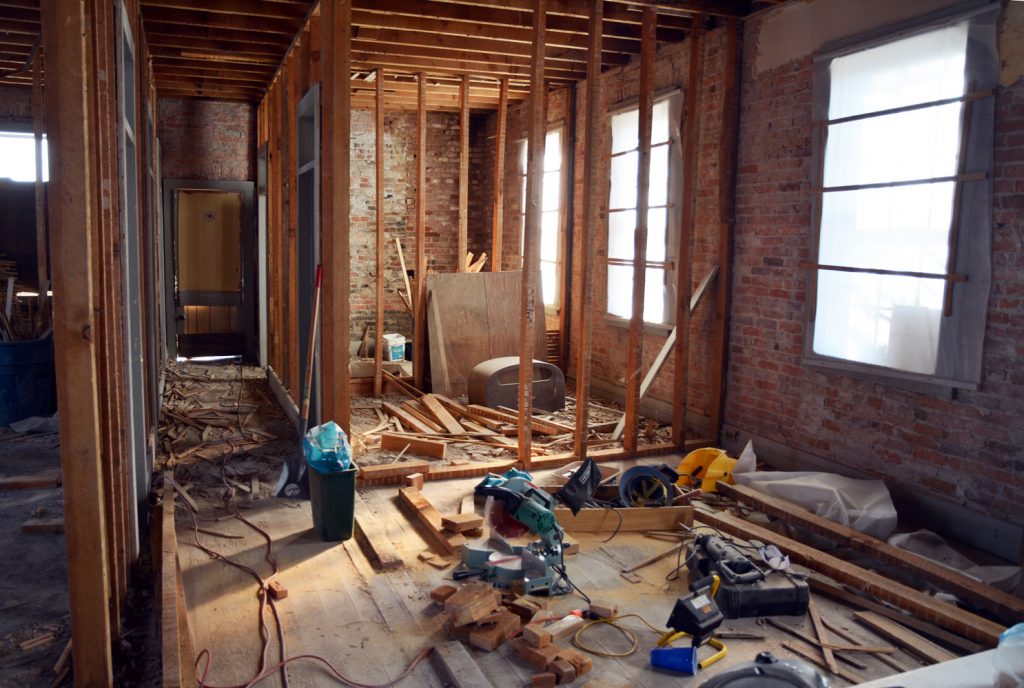 This included another dump run with the last of the plaster. 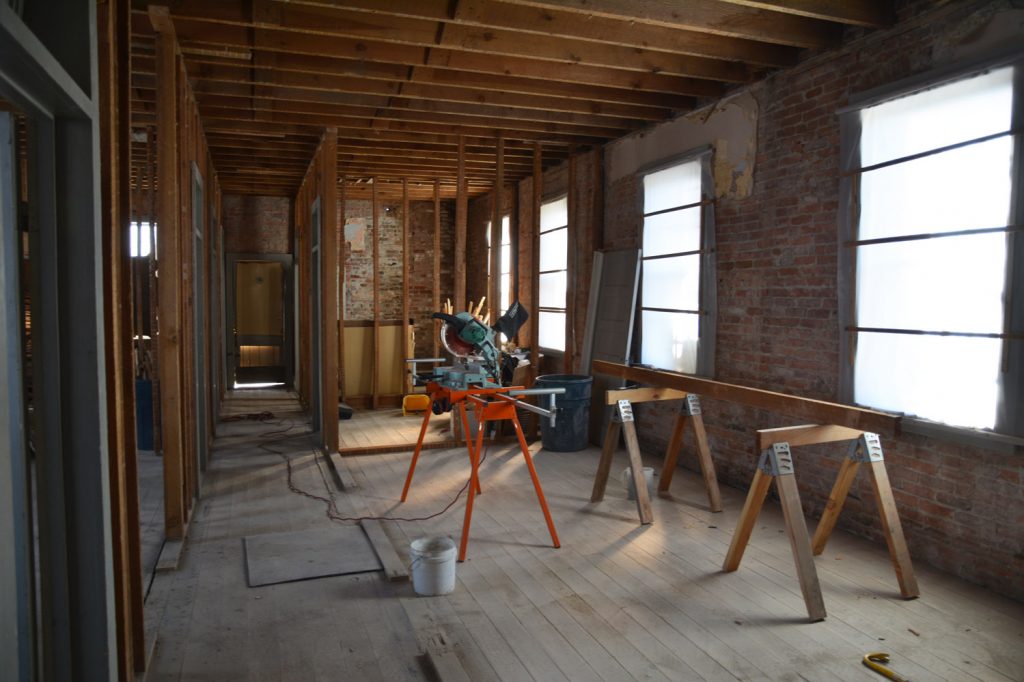 I finally have a clean space to work.

Meanwhile, we had a side adventure on Halloween. Considering that the hotel had been broken into before, it seemed like a good idea to stake the place out for the year’s most mischievous night. So, My wife and I ordered a pizza, set up a table and played cards until the wee hours. Of course, no corporeal pranksters came by which was a bit anticlimactic but we did entertain ourselves by taking a few spooky night photos. Here we have a lot of orbs around our game table. 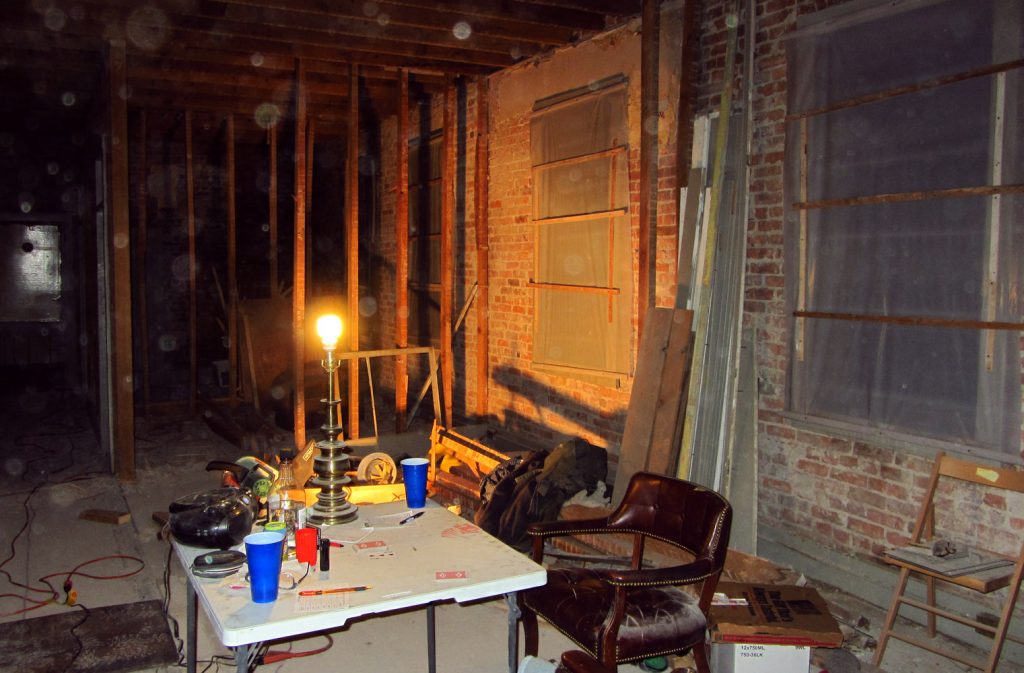 Are they spirits of the past or are they only dust particles captured by the camera flash? You decide.